The League adopts a small sided format and games will be played on Sunday Mornings starting on Sunday 19th May 2013. It will be run as a preseason league with teams playing at the age group they will play at during the upcoming season (ie 2013/14). We will use FA qualified and affiliated referees and in addition to this, JMO Sports Park is an affiliated football centre with the Lancashire FA.

In order to accommodate all age groups, leagues will be set up as follows:

Once we have teams entries confirmed, we will arrange fixtures for the summer with the league due to end prior to your regular season commencing in order to avoid any conflicts.

From last year’s experiences, we know that this exciting league enhances the offering of local junior football and has genuinely benefitted the teams that took part once their regular seasons started up again.

If you would like any further details on this, please feel free to get in touch by email or phone. If you would like to enter your team, please complete the attached/enclosed form and return it to us with your entry fee to cover your first two match fees. 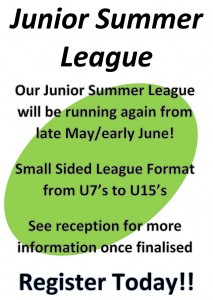 5 a Side Teams Wanted for New Leagues 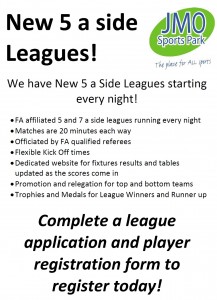 If you are looking for a competitive 5 a side game on a weekly basis, JMO Leagues are the perfect solution on pitches better than the pros train on

• Competitive 5 a side Leagues every night of the week on the best artificial grass playing surface in the area
• All pitches fully enclosed including roof netting
• Mens, Ladies, Veterans, Juniors, Students and Corporate Leagues
• All leagues are fully FA Affiliated with Lancashire County FA
• Fully qualified and affiliated Referees
• All Games 20 minutes each way
• Promotion and Relegation for top and bottom teams respectively
• Trophies and medals for winners and runners up
• Up to date fixtures, results and table live online

Subscriptions:
Only £25 per team per game – squads of 8 per game

Register by completing the downloadable Application and Registration Forms above and send them back in to us via mail or email today to get involved straight away! 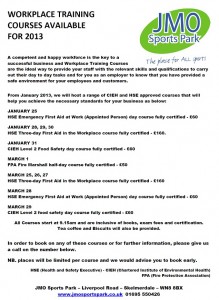 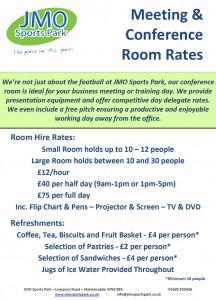 Posted in News and Upcoming Events |

New 9 a Side Training Pitch Now Available for Bookings 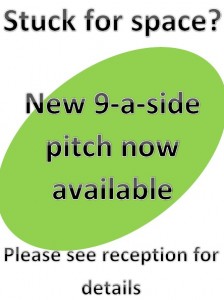 See Our Pitch Hire Page for More details about booking  a pitch!!

Click here for up to date Fixtures, Results and Tables on all JMO Sports Park leagues

The Venga Boys Are Coming …. or rather going to Bury!!

Nine teams played on the night split into two groups knowing that the top two teams in each group would progress onto the Regional Final in Bury and be only one step away from the National Finals at Wembley Stadium itself.

Group one was made up of the Venga Boys, Bickerstaffe Panthers, Lacey’s Allstars, Murphy’s Law and Port FC and was a fairly tight group. Early games saw each team taking points off each other though the Venga Boys started to look as they may be the team to beat winning their first three games. With one game each to play three teams were sat on 4 points and with Port FC slipping up, Murphy’s Law, who had drawn 3-3 with the Venga Boys earlier, seized their opportunity to move into second place in the group with a 2-1 win over Bickerstaffe and in turn booked their place at the Regional Finals along with the Venga Boys who topped the group on 10 points.

Group two made up of Bayern Neverlosin, Bickerstaffe Tigers, Spartons and Upholland FC was a little more straight forward with results going to form. Spartans qualified as group winners going through unbeaten with an impressive goal difference of plus 15. After only going down by 1 goal to Spartons, Upholland clinched second spot winning their other two games and generating an even more impressive goal difference of plus 18!

So with the 4 qualifiers for the regionals decided, the only issue was who would be top dog on the night. Venga boys kept a clean sheet 3-0 against Upholland to win their semi-final and Spartons continued their unbeaten streak and dispatched Murphy’s Law 7-1 though mention does go out that Murphy’s Law got a tough run of games playing their last two group games and their semi-final back to back though sometimes that’s just the luck of the draw.

So it was the top two from the group stages who progressed through to the final. The game was tight in the early stages. Venga Boys scored first midway through the game and shortly after bagged a second. Spartons, whose confidence was high going into the game, kept going forward but struggled to break down their well organised opposition. The Venga Boys made good use of their subs too as the game went on, whereas Spartons only had the bare 5 and this was to prove the telling point in the end as Venga Boys ran out eventual winners by 4 goals to 1.

Overall, the standard of football was high with a competitive edge as expected but all within the true spirit of the game and we’d like to extend a big thank you to all the teams that took part.

Congratulations go out to the Venga Boys on running out overall winners on the night and best wishes to them, Spartons, Upholland FC and Murphy’s Law at the Regional Finals in Bury on Sunday May 1st.

We’ll keep you informed of our next tournament and look forward to the commencement of our League programme in the next couple of weeks.

The following teams are on the lookout for new players. Click the logo to go to the club website for more information.